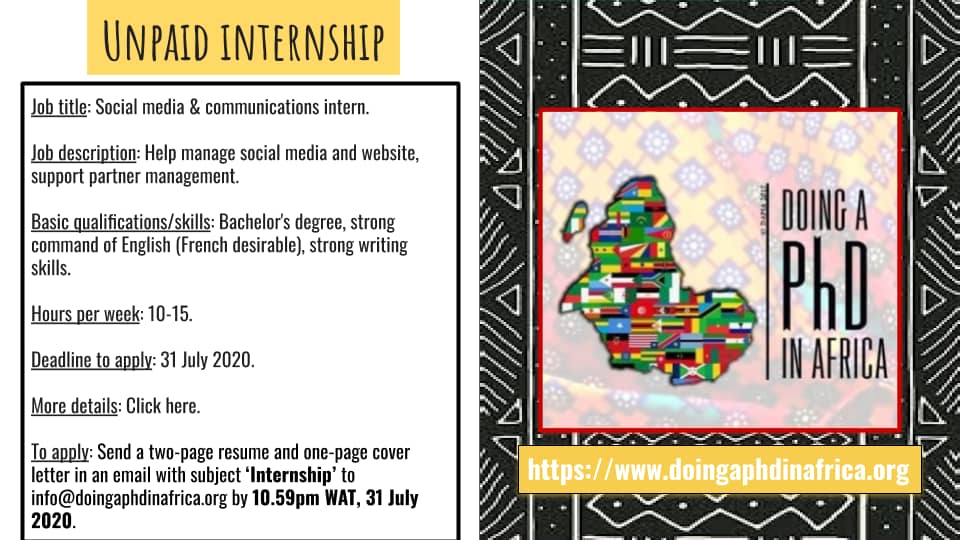 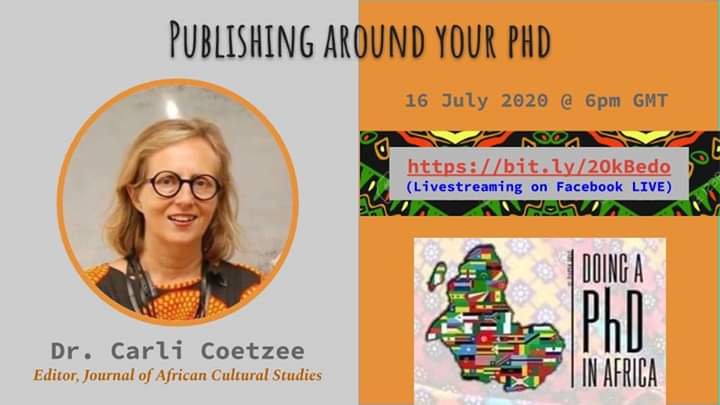 Publishing around your phd

All interested persons are invited to an interactive webinar to discuss how to publish based on your doctoral research. 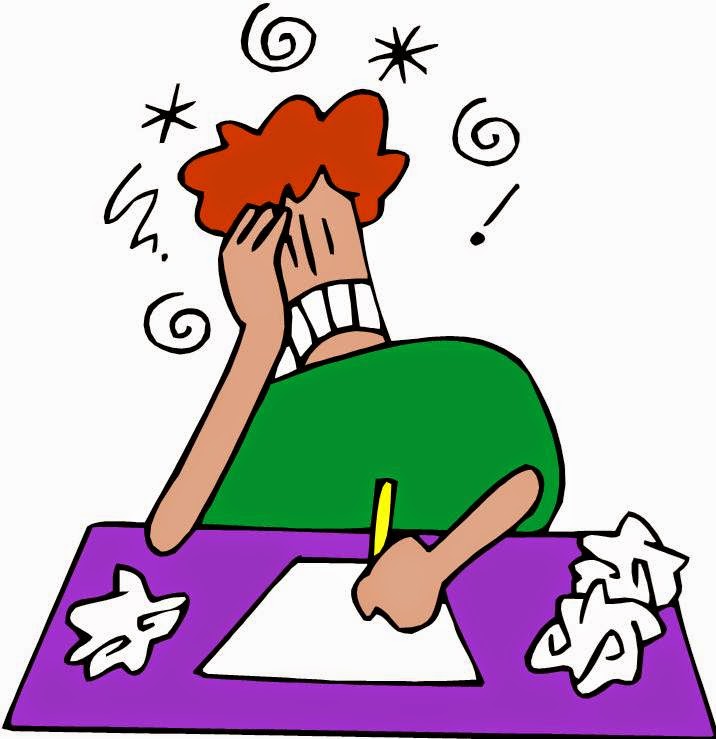 In this article, Omomayowa Abati reflects on Writer’s Block, a challenge that many scholars face, based on his moderation of a PhD Peer Support Forum on the same topic on 9 July 2020.
How funny it is that I spent over ten minutes staring at my computer screen, deciding how to start this article. The thought that made me blank was, “what is the ideal way to start a blog post?” which I believe is different from the familiar academic writings. That is one of the causes of writer’s block for many people – the frustration of trying to write in conformity with some conventional writing structures or the desire to produce a perfect draft that wouldn’t need editing.
Read More
7 JULY 2020 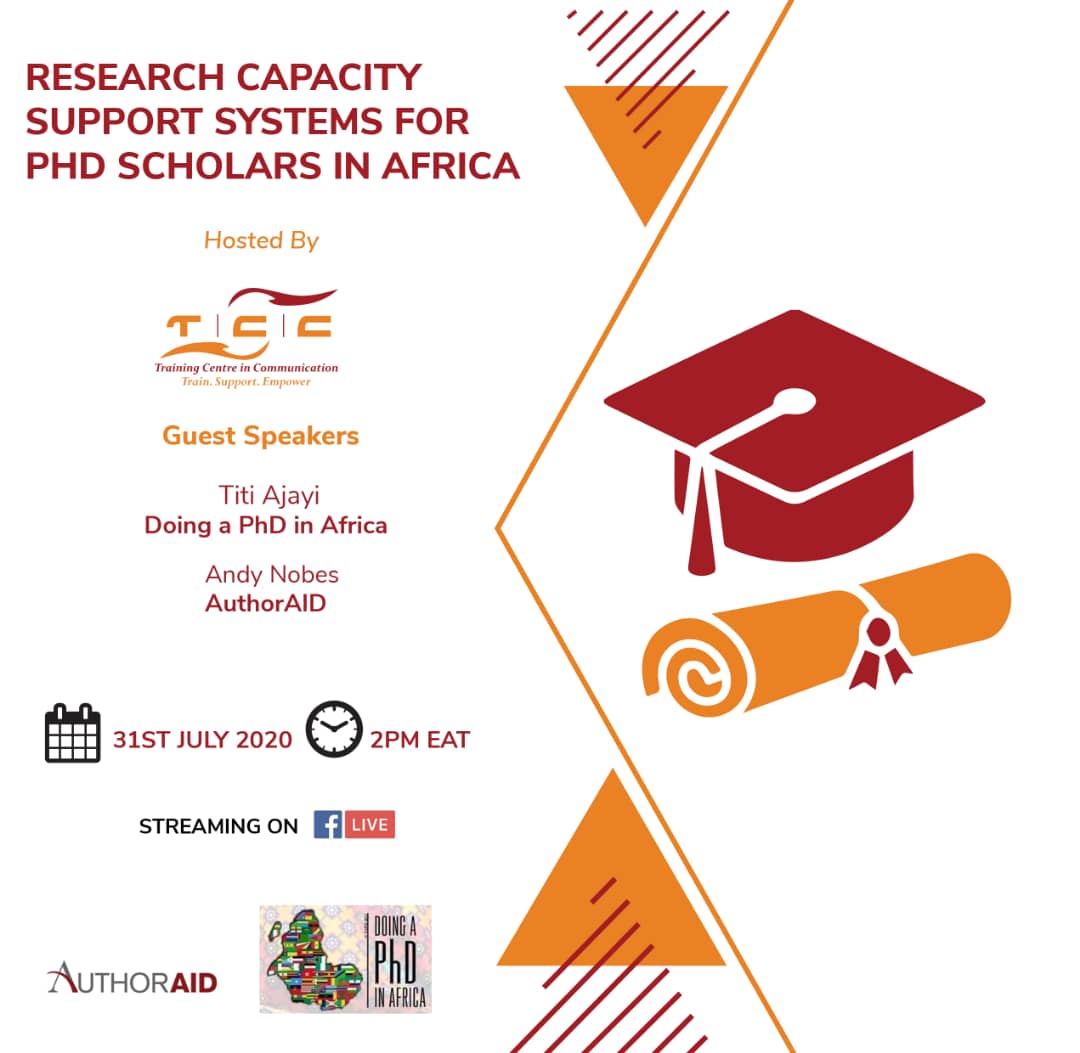 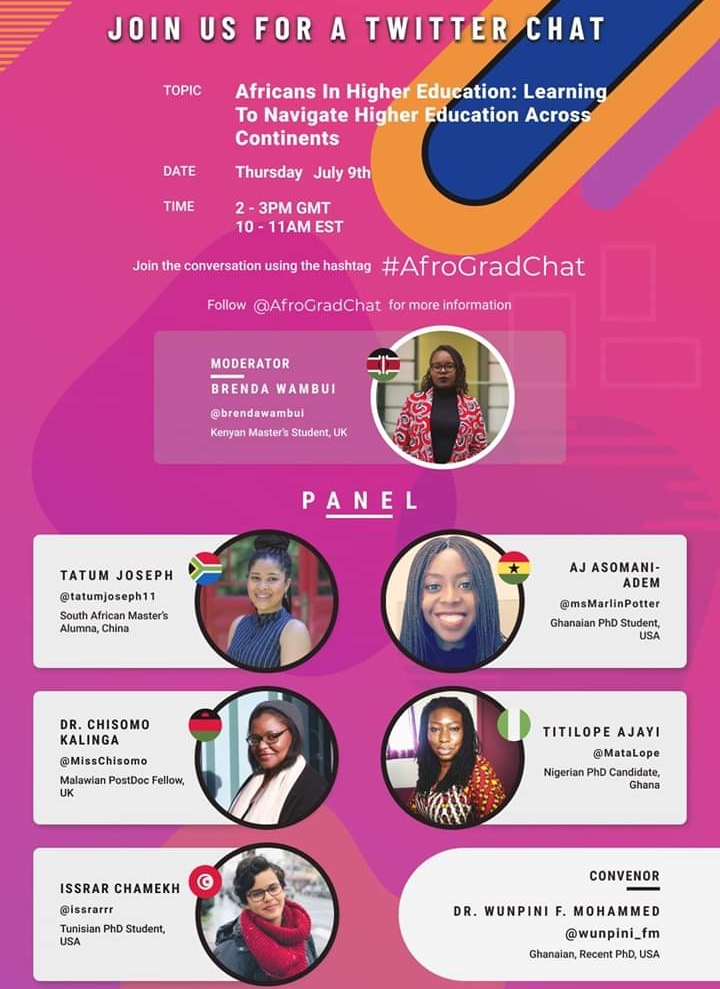 If you’re at any stage of your PhD and wondering how to source funding for research, tuition or basic survival, join peers in a session with educationalist and Doing A PhD in Africa associate, Kenneth Gyamerah at 6pm GMT on 2 July. Email info@doingaphdinafrica.org for access details. 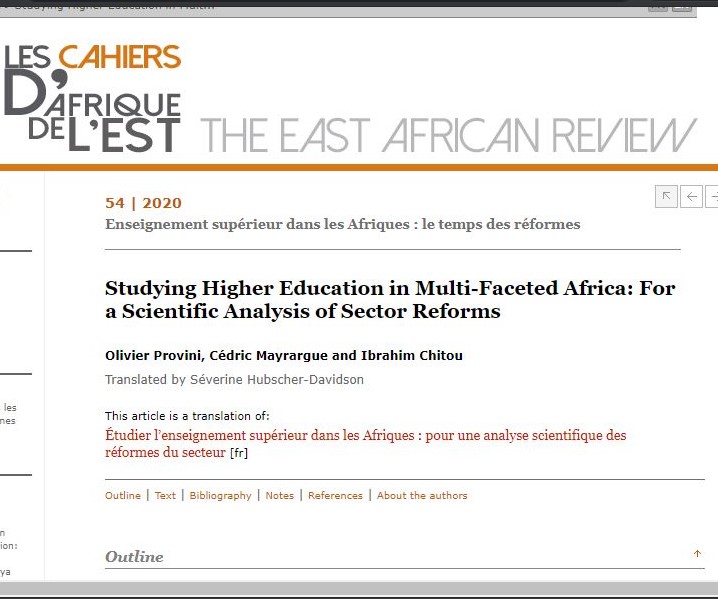 Studying Higher Education in Multi-Faceted Africa: For a Scientific Analysis of Sector Reforms

Students across the continent, for example in South Africa since 2015, have mobilised to protest the increase in university tuition fees, condemn the marketisation of education, and question the content and purpose of higher education (Botiveau 2016). In the Francophone countries of Africa, academic staff have attended a great many workshops aiming to reconfigure their study programmes according to the Licence (Bachelor)-Master-Doctorate (LMD) model, a process which entails calculating the number of course units that are required to validate a student’s programme of study. The media and local officials continue to rush to cover events such as the creation of a brand-new private institution funded by a local entrepreneur, the opening of a prestigious European or American university branch campus, or the laying of a foundation stone for a new lecture theatre funded by a foreign government. Everywhere, policies for evaluation, standardisation, and programme accreditation are being implemented. Across the continent, universities are proliferating and new governments question the legitimacy of those set up by their predecessors, as was the case in Benin following the 2016 presidential elections. 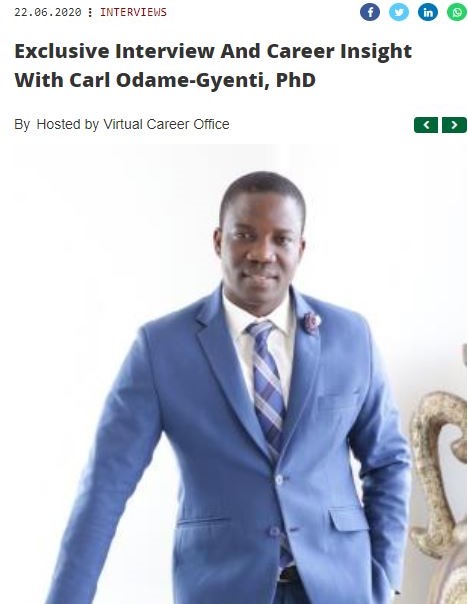 By Hosted by Virtual Career Office

Most young people and graduates from the University and other tertiary institutions don’t usually know their career path even after school. That`s not a problem, it`s ok. In an exclusive interview with Dr. Carl Odame Gyenti, a banker by profession, Writer and Musician, he shares insight on his career path over the last few years. If you are student, graduate or young professional questioning the world of work, you can find some answers you seek or perhaps questions you even didn’t know you had. His journey towards his career will provide some key lessons to many roles or jobs 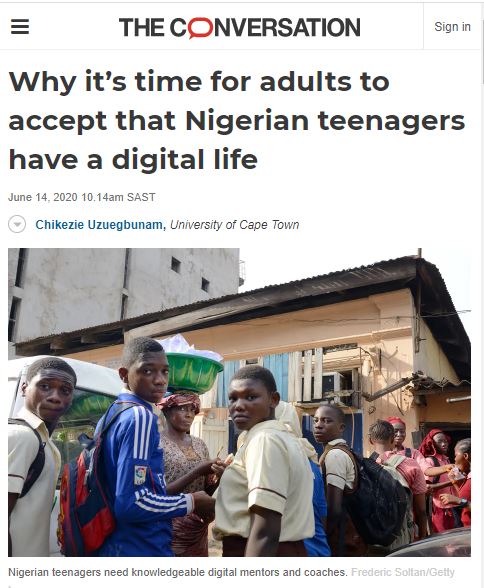 All over the world, the reach of digital technology is growing at an extraordinary rate, even in developing countries. Young people are growing up in an environment ruled by digital devices, the internet and social media.

Research evidence indicates that using the internet and other technologies such as video games and computers has become a daily routine for many children and adolescents from high-income to low-income countries. The United Nations Children’s Fund reports that children are accessing the internet at increasingly younger ages, and that smartphones are young people’s gadget of choice. Phones guarantee easy online access and are more private.

Nigeria is one of the African countries in which the internet and digital media penetration has been increasing in leaps. The country accounts for close to 30% of internet penetration in Africa. According to a global digital report, there were 85 million internet users in Nigeria as at January 2020. Although an estimated 60% of the population is made up of young people, there is little known about how they use digital technology every day. 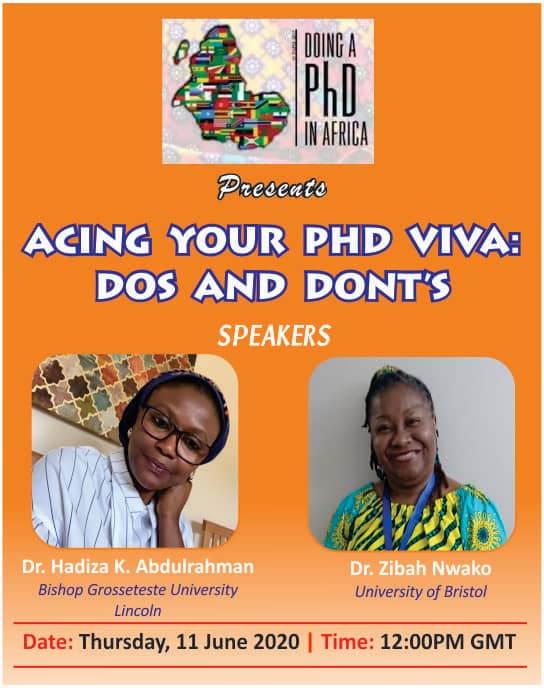 After the gruelling work of completing your thesis, the final step, known as to ‘viva voce’ or defense, involves presenting your work and defending your results before a panel of accomplished scholars in your field. We have put together a panel of dynamic African scholars to help you understand and prepare for the experience. To take part, please send an email to info@doingaphdinafrica.org 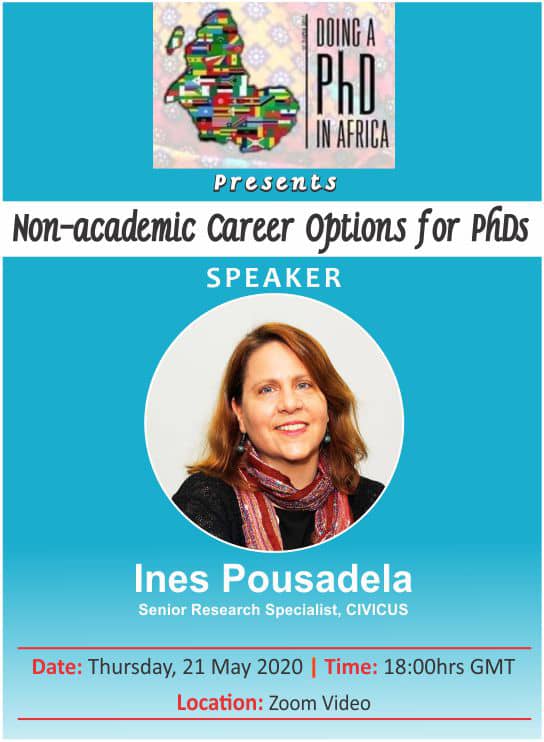 Non-'academic' Careers for PhDs: Lessons from a Transitioned Life

For some time now, education analysts have observed a gap between the numbers of PhD graduates and available opportunities in universities across the world. (Please note the hyperlinked article references the US.) They have also remarked industry’s skepticism toward hiring PhDs based on perceptions that they lack relevant technical skills and are too disconnected from the world. While we remain convinced that getting a PhD is a good thing (read more about that here), despite some of the challenges associated with doing a PhD in Africa, we are less persuaded that every PhD is destined for tenure track life. 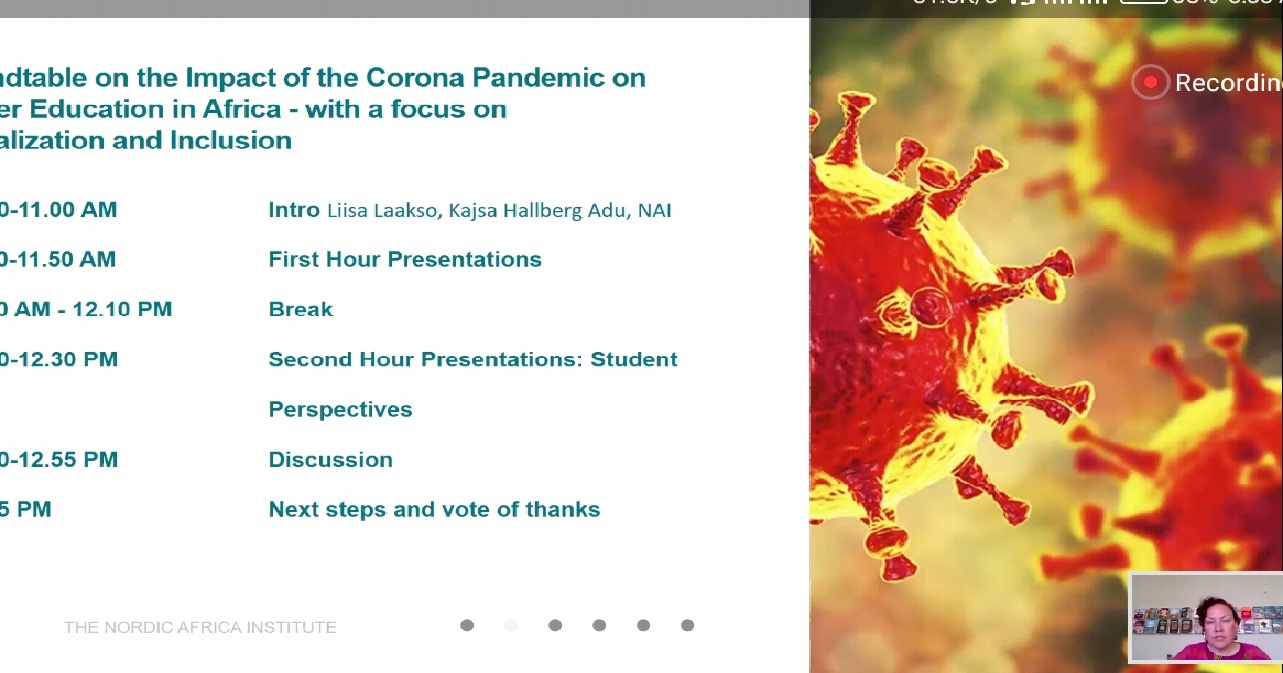 The Impact of Covid-19 on Higher Education in Africa

On 14 May 2020, Doing A PhD in Africa took part in an Online Roundtable on the Impact of the Corona pandemic on Higher Education in Africa with a Focus on Digitalisation and Inclusion. It was co-hosted by the Nordic Africa Institute and the Association of African Universities and attended by diverse African academics from across the continent. 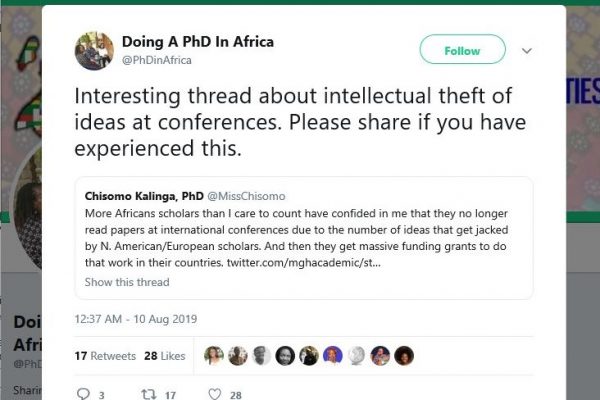 Interesting Thread about Intellectual Theft of ideas at conferences

On Saturday, 10 August we shared a Twitter post about intellectual theft in academia that generated heated debate but also insightful advice. Read the thread here.

Travel: An extreme sport for Africans

Visa applications can feel like a sacrifice to the gods

In 2019, Temitayo Olofinlua, a Nigerian writer and academic, was denied a visa to attend the European Conference on African Studies in Edinburgh, UK. The British High Commission in Nigeria said they were “not satisfied” that Olofinlua would leave the UK at the end of her trip.

The visa refusal was later rescinded by the UK Home Office. Olofinlua went to the conference and has since returned to Nigeria. 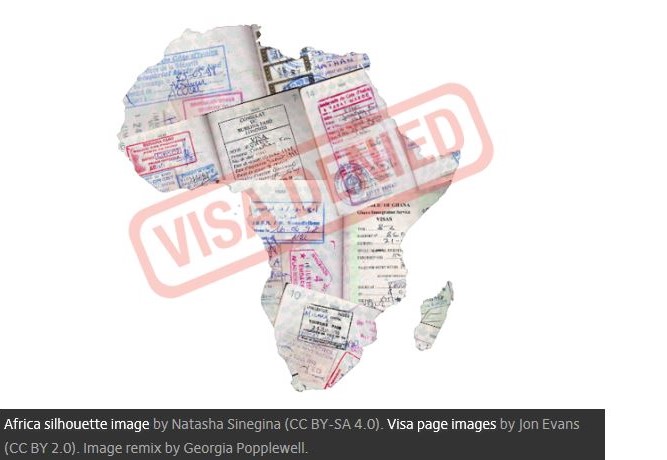 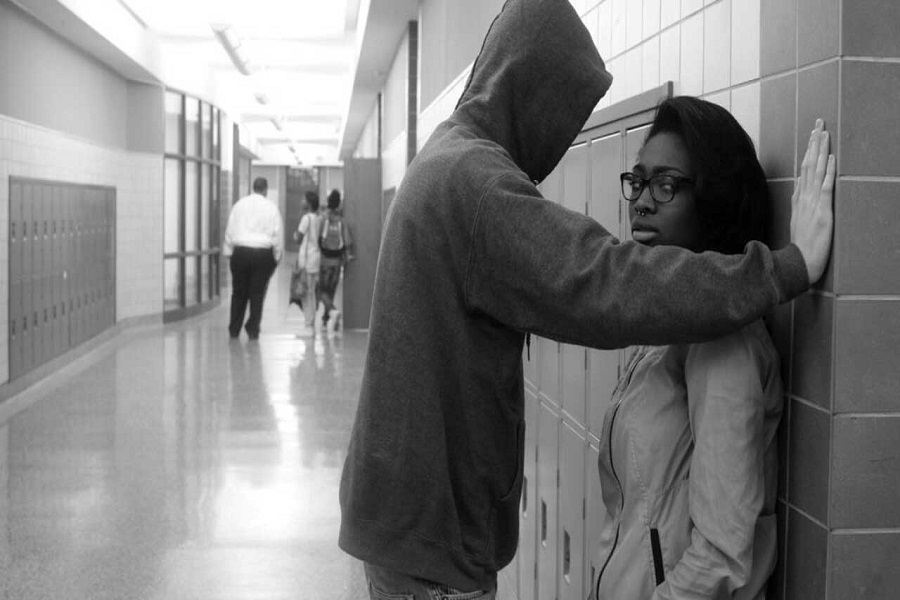 To address the menace of sexual harassment in schools, a non-governmental organisation, Inanna Women Empowerment Foundation (IWEF), has called on students to report any form of sexual assault offering such persons free legal assistance.

Speaking at a sensitisation programme held at the Lagos State University (LASU), Ojo campus, the group enjoined female students to report cases of harassment from sexual predators within and outside their campuses by interfacing with civil organisations within their reach in the state.

A couple years ago, I attended a conference called “Engineering a Blockbuster Career.” It was run by a biomedical institute, so I assumed—correctly, thankfully—that “Blockbuster” was being used as an adjective, as opposed to a reference to a job at a video rental store.

Attendees asked the panelists how to overcome various roadblocks in their career searches: “How can I network if I don’t know anybody?” “How can I find a position despite lack of experience?” And, strangely, several people asked a question that sounded so counterintuitive that it was almost laughable.

“How,” they asked, “do I find an employer willing to overlook my most flagrant disadvantage: my Ph.D.?” 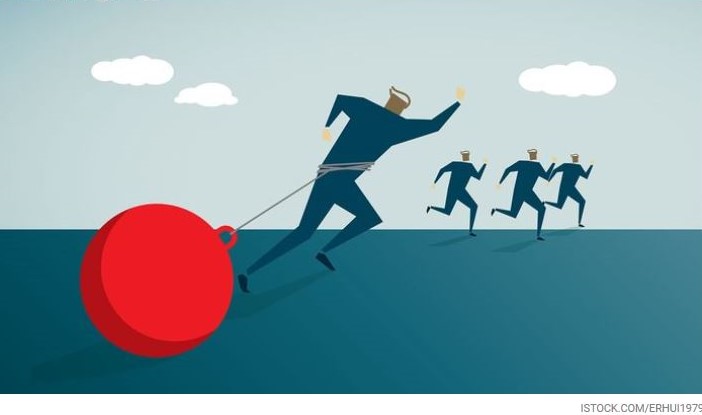 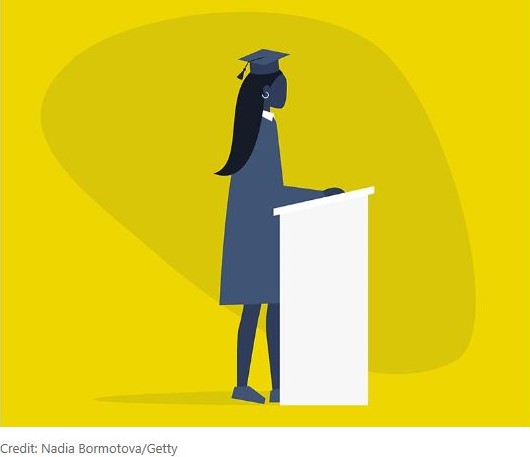 My nine steps to success as a PhD student in Nigeria

Medical physicist Iyobosa Uwadiae ignored sceptics who questioned her plan to pursue a doctoral programme in the African nation. Here is her advice.

In 2014, I left the United Kingdom after earning a master’s degree in medical physics at the University of Aberdeen, followed by clinical training at the Royal Marsden Hospital hospital in Sutton, London. When I returned to Nigeria, I enrolled in a PhD programme, also in medical physics, at the Obafemi Awolowo University in Ile-Ife.

I came home to be closer to my family, and to develop medical physics and advance the fight against cancer in Nigeria.

Navigating the research Terrain for Graduate students in Africa: a reflection

Early this year, a woman I know from her public engagement in Uganda walked up to me after I had spoken at an event, politely requesting some of my time for a brief chat. We stepped aside and she poured out her heart—her master’s dissertation was not going well. She wanted me to give her feedback on what she had written so far because she felt lost. Although she was not studying at my university, I agreed to read her work. She sent her work to me the same day. 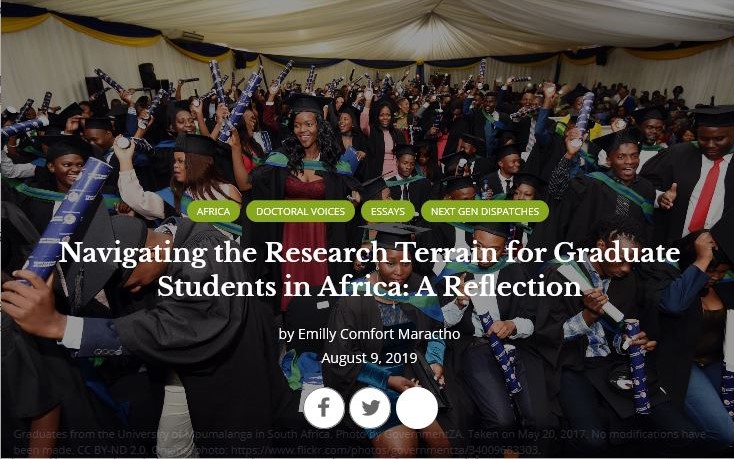 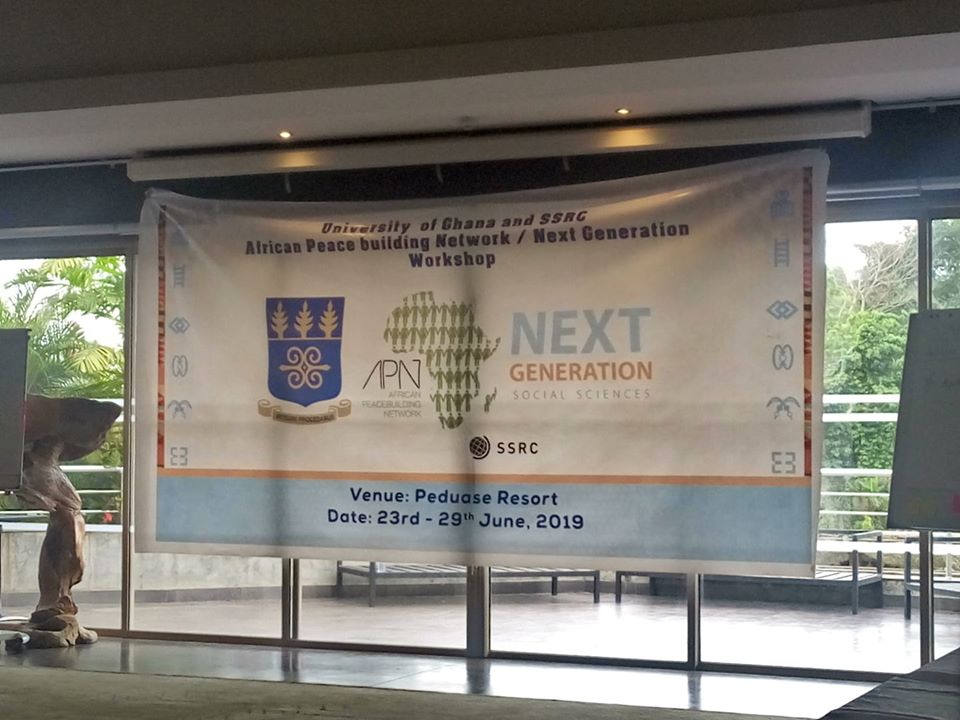 I promised some nuggets from the NextGen workshop

I promised some nuggets from the NextGen workshop that took place in Accra last week. These are some learnings from my dissertation research cohort which was facilitated by Dr. Godwin Onuoha, a political anthropologist at Princeton University. 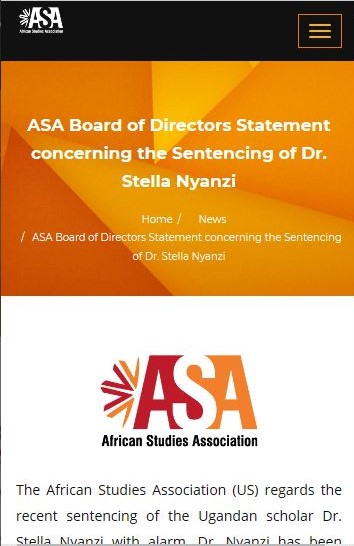 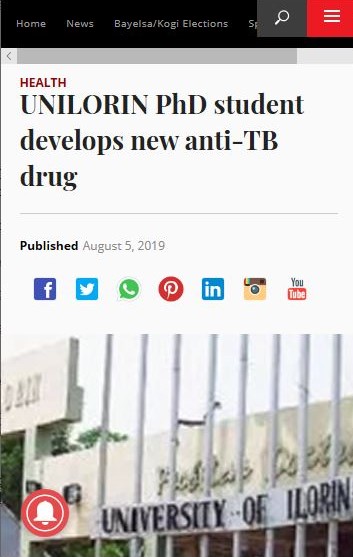 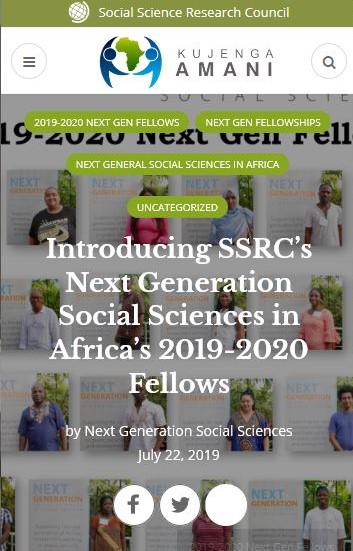 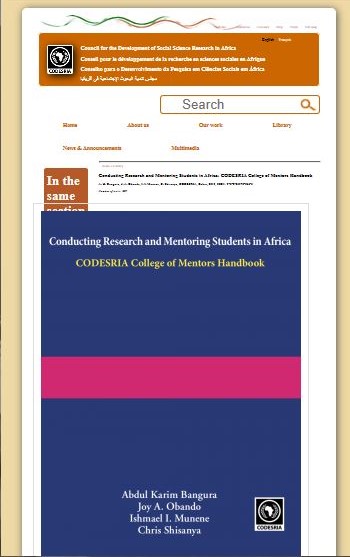 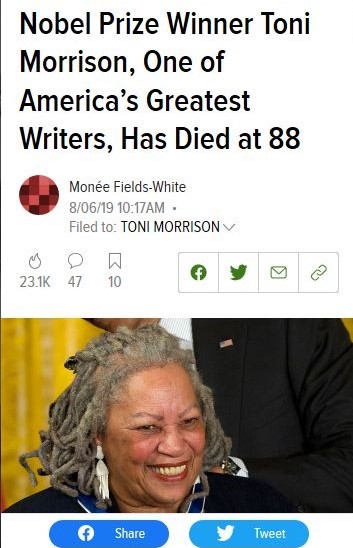 You can also read 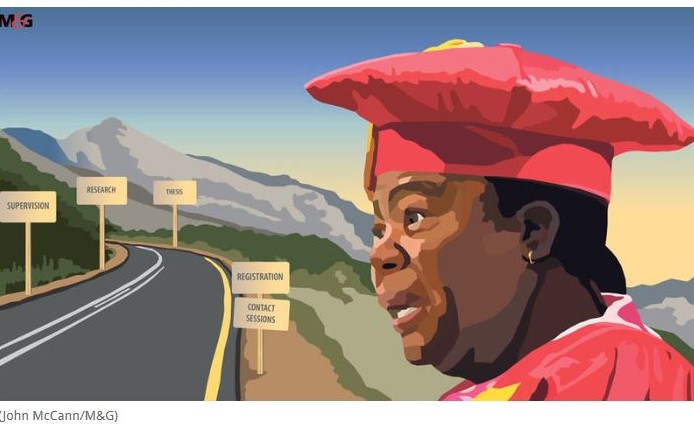 How to complete your doctorate while serving in the Cabinet 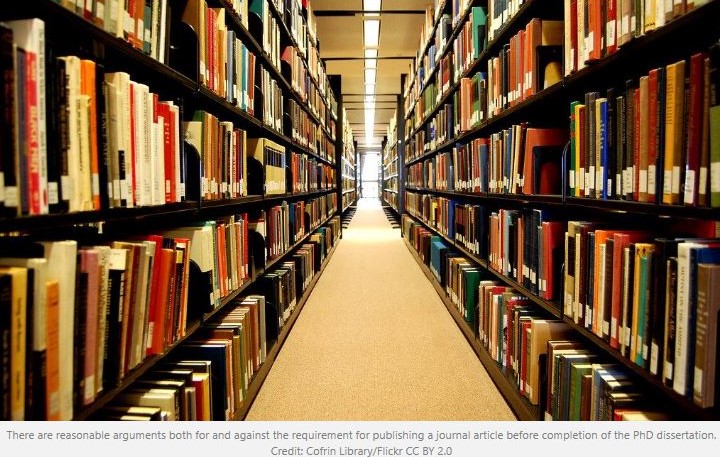 Should Publishing Journal Articles Be Mandatory for PhD Students? 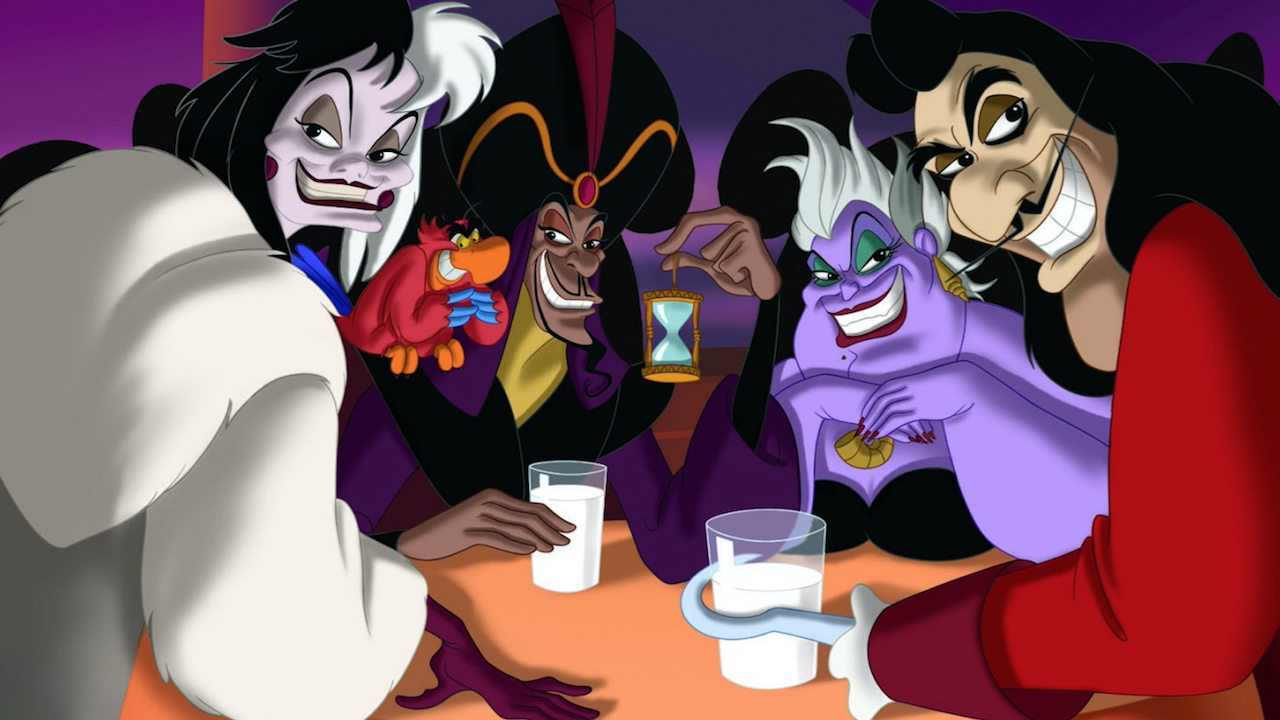 The Problem with Assholes