DOING A PHD IN AFRICA

The global health crisis has changed how we all work and socialise. To respond to this, Doing A PhD in Africa initiated a bimonthly online Peer Support Forum in May 2020. The purpose of these meetings is to provide a safe space for African doctoral scholars to share concerns about their research, their thoughts and feelings, and give and receive empathy for challenges they are facing in life and at work. Please email info@doingaphdinafrica.org to join the next session on 11 June 2020

WELCOME TO DOING A PHD IN AFRICA

Doing A PhD in Africa is the premier resource for African doctoral scholars. Working with partners across the world, we are raising the profile of African scholarship by building nexuses between people, information and key resources.

Doing A PhD in Africa (DAPIA) is a nonprofit, nongovernmental association incorporated as a company limited by guarantee in Ghana. It began in February 2017, led by Titilope Ajayi, a PhD student at the University of Ghana and a writer-researcher with a passion to raise the profile of higher education on the continent. Her initial motivation was to fill a gap in information and networking space targeted at doctoral scholars in Africa. This she did through a Facebook group that grew from a handful of members in 2017 to almost 600 by early 2019. As numbers grew and exchanges advanced, it became clear that DAPIA needed to position itself as a platform to more formally contribute to improving access to quality doctoral study in Africa as well as the associated conditions. The platform has thus positioned itself accordingly.

– The centering of Africa and African experiences of life and doctoral study are at the core of DAPIA and all its activities. Therefore, we try to adopt and infuse African(ist) perspectives in everything that we do.

– Giving back and paying forward: Inculcating in everyone associated with DAPIA, particularly those who benefit financially or otherwise, the need to give back and pay forward any knowledge or support that they receive, particularly to universities and students who do not ordinarily have access to the more prestigious African doctoral support schemes.

– Representation in diversity: DAPIA aims to have representation in its management and operations from across the continent with due attention to gender and other social markers. Our planning and activities factor experiences and knowledges from multiple African contexts and worldviews.

– Facilitate access to doctoral education through information and resourcing 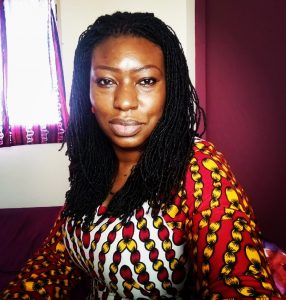 Titilope is currently a PhD Candidate in International Affairs at the University of Ghana where she is studying gender and activism within the Boko Haram conflict. She is a three-time fellow of the Africa initiatives of the Social Sciences Research Council and has specialisms in gender, conflicts and security, and civil society and civic space. over the past 15 years, she has conducted research on gender mainstreaming in African security forces, state responses to violence against women, African security architectures and diverse aspects of civil society with a focus on Africa.

Her current work, sponsored by the African Peacebuilding Network, centres on women and terror in Africa, the intersections of national and global frameworks on women, peace and security, and the gender dynamics of the displacement crisis produced by the Boko Haram conflict. Titilope has held previous appointments as Head of Research and Documentation at the West Africa Civil Society Institute, Fellow/West Africa Analyst with the International Crisis Group, Research Associate with the Kofi Annan International Peacekeeping Training Centre and Regional Programme Manager West Africa with the Friedrich Ebert Stiftung.

She has consulted for the UNFPA, the European Commission, the Open Government Partnership, the African Security Sector Network, and the Women in Peace and Security Network-Africa, among others. She is a member of the African Security Sector Network and the West Africa Security Network. She is also a member of the African Studies Association of Africa and has served as its executive assistant since 2018. Titilope is on the Editorial team of Feminist Africa and is an accredited member of FemWise-Africa. Titilope enjoys writing and contributes periodically to Kujenga Amani, The CIHA Blog and The Nonprofit Quarterly online.

In 2017, Titilope founded Doing A PhD in Africa, a resource to encourage networking, peer support, and information and experience-sharing among African doctoral student on the continent.

Her latest publications include:

#MeToo, Africa and the politics of transnational activism, Africa is a Country, shorturl.at/yCIP8 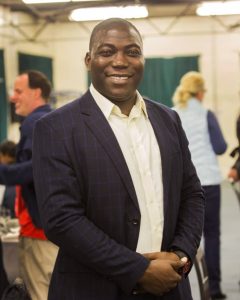 Dickson Ajisafe ia a research Associate at the Senator George J. Mitchell institute for Global Peace, Security and Justice and the School of Social Sciences, Education and Social Works, Queen’s University Belfast, Northern Ireland. He possesses a Master degree in African and European Cultural Relations from the University of Pretoria, South Africa; a Master studyin Politics and Public Administration at Konstanz University, Germany and a Master of Arts degree in International Relations from Obafemi Awolowo University, Nigeria.

He is a graduate member of the United States Institute of Peace (USIP); Occupational Safety and Health Academy-(OSHA), USA; and the United States Agency for International Development (USAID). He is a member of African Students and Alumni Forum ASAF and lectures Year 4 International Relations’ students on European Studies and Comparative Regionalism at the University of Pretoria and functions as Proposal and Project Evaluator for ESAAeu in Brussels and also serves as an Executive Officer with the European Studies Association of Sub-Saharan Africa. 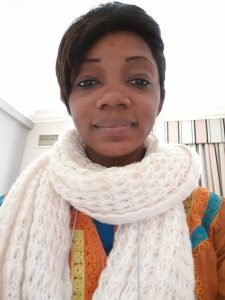 Dr. Amina Djouldé Christelle is currently Head of the Unit of the Partnership, National and Regional Cooperation at the Department of Scientific and Technical Cooperation-Ministry of Scientific Research and Innovation.
She is also senior lecturer at the Department of History (Faculty of Arts, Letters and Social Sciences ) of the University of Ngaoundéré. Her research interests are focus on political cartoon,  African politics, visual studies, and African endogenous approach to Peacebuilding. She is also interested in the study of gender-related imageries and women representation. Through her research activities on visuals studies, Amina Djouldé is evolving a new approach of writing history by images and a new theory on Visual Colonial Library. In this vein, in furtherance of her academics activities, she has attended conferences, trainings and workshop in several countries.

She has also published several papers and contributed to book writing that focus on politics, visual studies, history and diplomacy. She is also a member of the editorial board of the African Humanities. Journal of Social Sciences. As the Coordinator of the Community Research and Development Center (COREDEC), she organizes workshops and interacts with local and international students. She is also academic advisor at School for International Training (SIT-US) Study Abroad-Cameroon / COREDEC. 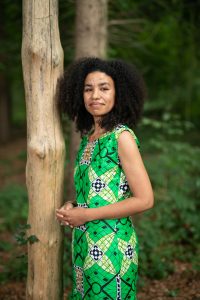 Carolina Nvé Díaz San Francisco is a Hispanoguinean medical anthropologist born in Salamanca (Spain). He studied anthropology at the University of East London (United Kingdom) and University of New Mexico (United States). She has worked on research projects related to community health, and is currently based at Boston University, School of Medicine, where she collaborates in programs and initiatives aimed at migrant communities, women, and adolescents. The author is preparing doctoral research on health care systems, mental health, medical coverage in relation to dictatorships in Equatorial Guinea. She has published My mother is a star, (first edition), My mothers are stars (SIAL, 2019), and the essays “The Midwife of Wetzel County” in Broken Petals: An Anthology, and “Skins, Identity and Their Tragedies: The Learning and Healing of a Hispanoguinean Woman in the Diaspora” in the anthology Pan African Spaces: Essay in Black Transnationalisms.